'I recently spent a few inspiring few days in Berlin, with Maria Torres-Quevedo (Prospect Organiser for Tech and Games in Scotland) at the first games and tech workers assembly organised by Uni Global Union.'

The conference brought workers and organisers together to share successes, challenges and learn from each other’s work. The big question for conference was – how do games and tech workers Organise to Win? #OrganizingFTW.

The list of successes in tech and games is growing and workers from across the globe shared their experiences.  Maria said: “it was great to meet workers from workplaces in tech and games where they have successfully organised. Putting a human face to news stories really brings home the fact that these fights are winnable by regular people”.  The issues that were raised at the conference are common to all workers, although the focus may change to reflect workplace cultures in different countries. What all the organisers had in common was a desire to build minimum standards and stamp out practices that are damaging to workers health. This may be in cultures of long hours or “crunch”, of bullying and harassment or discrimination.

What was clear was workers in tech and games want a safe place to work where they can be proud of their work culture and importantly, have the same opportunities as anyone else regardless of gender, sexual orientation, or race.  Union members in tech are also focused on broader issues of corporate social responsibility. They care about the future and want to be sure that their labour is not contributing to social or environmental harms.

Some of the speakers at conference talked about these broader concerns and there was a good discussion about how these issues may be the ones that drive people to want to organise so it’s important that these topics are not ignored by organisers.  One tactic I have never seen before is petitions on shirts. Negotiators in Romania sat at the table with the names of the workers they represented signed on their shirts, and interesting tactic and a good visual reminder that the person at the table was speaking up for all their colleagues.  Although it’s not legal, heavy handed union busting has been commonplace in the US so it was really encouraging to hear that some organisations are taking a different approach. The recent ‘labour neutrality’ agreement signed by Microsoft is a great first step. The right to organise and form a union is a fundamental human right and it shouldn’t be necessary to have such agreements but by doing this the company are signalling that they will play fair and allow their workers to organise where they wish to in future.

For organisers and officials understanding the different labour laws in other countries is an important aspect to help understand strategies applied in different countries. Terminology used in the USA can be different and that can sometimes be confusing for members who are trying to organise in the UK, for example, we don’t use union cards here and we speak about collective bargaining agreements more than winning contracts.  In the UK, like the USA all that is needed to form a union is for the majority (50%+1) of workers to agree to it. There may be slightly different processes to demonstrating this agreement, but what matters is that the power to form a union is in the hands of workers and although the employer may not want it to happen, at the end of the day it is not their decision to make.

The Prospect network for tech and games members is growing and there are many members enthusiastic about organising in their workplace or campaigning to make a difference across the sector. Maria and I will be sharing what we have learned with members and using that to support them to organise for their own win. We really hope to be able to take some Prospect tech and games members along to conference next year to talk about their successes. Read highlights from the conference agenda here. 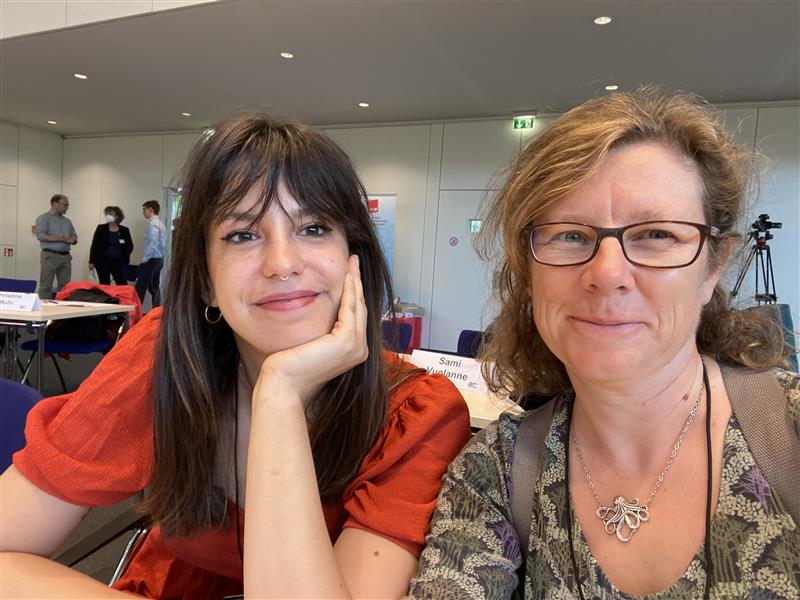 Our organisers at the tech and video game workers conference, Maria on the left and Sarah pictured right.